Anyone who has ever been hiking, mountain biking or horse riding on the Kempense Heuvelrug knows that this area lives up to its name. Countless times the dirt roads take you up and down the ridge, amid pine trees. Along the way you can not only enjoy the vast coniferous forests, but also heathland, peat bogs such as Zwart Water or Snepkensvijver, parabolic dunes (a crescent-shaped dune), hollow roads (roads between two slopes) and deciduous forests.
In the north the ridge is flanked by the Aa river valley, in the south the ridge looks out onto the Kleine Nete river valley.

The Kempense Heuvelrug is a remnant of the wind-shaped sand ridges that were created when the sea withdrew approximately 2.5 million years ago. The core of this narrow, elongated hump is no less than 15 km long and connects to the municipalities of Retie, Kasterlee, Herentals, Lille, Vorselaar and Grobbendonk with the corresponding dune areas.

We zoom in on the ridge between Lichtaart and Herentals, with the Nete valley.

The forests consist of varying dry and wet areas, resulting in a typical and varied vegetation. This makes it a great place, not only for different types of plants, but also for numerous breeding and water birds. They enjoy the open water of Zwart Water and Snepkesvijver, in combination with the vast forests on the one hand and the meadows along the Kleine Nete river on the other hand.

The Hoge Mouw nature reserve is a part the Kempense Heuvelrug between Lichtaart and Kasterlee. It is owned by the Province of Antwerp, that purchased it in 1971. Covering almost 100 hectares, the Hoge Mouw refers to the highest point of the domain and to the highest point of the municipality of Kasterlee.  The Hoge Mouw is a parabolic dune on the Kempense Heuvelrug, with a height of almost 30 metres. The Hoge Mouw, a pine forest area with sand and dunes, connects to two other dunes in the direction of Kasterlee, i.e. Zwarte Berg and Kabouterberg. 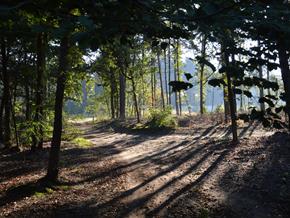